Cyndi's List was first published on March 4, 1996. I have a hard time believing that was 15 years ago. One of the questions I get asked a lot is how Cyndi's List got started. Each fall our local society meets to share what we did over the summer. In the summer of 1995 I bought a new computer with a blazing fast 9600 baud modem, preloaded with AOL software. I immediately started looking for genealogy resources online. I took what I had found to our society meeting in September 1995—one printed page of everything I found online. I had ten copies to hand out just in case someone else was interested. They were. They jumped on me like a pack of ravenous wolves! Our society's quarterly editor, Nancy Peterson, asked me if I would be willing to turn that into a 5 or 6 page article for the fall issue. Unwittingly, I did. And I decided I should probably categorize the web sites to make things tidier. This is how Cyndi's List was born. The following January I taught myself how to write HTML and I created a personal web site. When building the site I thought I would share my article with the links just in case anyone might find them useful. It was one long web page with about 1,025 links. The name I gave it wasn't very creative, but it stuck: Cyndi's List of Genealogy Sites on the Internet.
I shared my new web site and the list of links with others online via genealogy mailing lists. People started asking me to set up links to their web sites as well. So, I did, adding dozens of new links every day. I recall early on in 1996 that a gentleman told me that my page of links was too large and took too long to load. Remember, this is the early days when most people were using a dial-up connection. He had a good point, so I started building separate pages for each category of links. From that point on Cyndi's List took on a life of its own. It was a snowball, heading downhill. It was the Roadrunner and I was the Coyote. In those first days I worked on the site for a couple of hours each day. Before long I was spending 4 hours, 6 hours, and then 8-12 hours a day.
I also spent time on several genealogy mailing lists and helped by answering research questions. Between that and the link requests I was inundated each day as my e-mail grew to 500-600 messages daily. I spent less time on mailing lists and all of my spare time building Cyndi's List. My own research and my personal genealogy web site have gone virtually untouched since then. I created a FAQ and put up a "Before You E-mail Cyndi" page to try and stem the incoming flow of messages. I currently receive 200-300 messages a day, many of which can be answered with some pre-written templates.
In 1998 I was fortunate to receive sponsorship that lasted about 4 years with Sierra Software. That same year I registered the domain name and was offered web hosting by RootsWeb. Cyndi's List had become a more than full time job and business. Over the years I had some part-time helpers here and there, including my sister-in-law whose only job was fixing broken links. Five years ago I redesigned the site, as it appears today, with cleaner navigation. As of October 2007 I was on my own again, a one-woman show. I had to move the site to a paid server and advertising income drastically dropped along with the economy.
Today, Cyndi's List exists on more than 680 individual web pages, 180+ categories with more than 292,000 links for genealogical research. And I have been maintaining it the same way for 15 years—handwritten HTML. It is time for a new look. It is time for Cyndi's List to join the 21st century. I did something that is both personally and financially very scary for me. I hired fusionSpan, a web development company, to transform Cyndi's List into a database driven site. The upgrade will result in easier navigation for you and much easier maintenance for me. It should also mean a much greater reduced wait time for new links to make it into the appropriate categories. With time I hope it means I'll be able to do more writing, blogging, and researching. We had hoped to have the upgraded Cyndi's List online for today's anniversary. But, as you might imagine, transforming 292,000 links into a database is a tricky thing. We're close to having the site ready to go and might soon have a pilot version online for you to see.
Thank you to everyone who has supported Cyndi's List through the past 15 years. I hope you'll stick around for the next 15 as well! Keep an eye on Cyndi's List over the next few months because there are good things coming!
Posted by Cyndi Ingle at 8:56 AM

Happy Birthday, Cyndi's List! It's fun to hear how you got started and grew over the past 15 years. I don't think many people realize that it's you, Cyndi, that has done all the work; not a company, not a massive organization with lots of people, just you and an occasional helper. You have created an invaluable tool for everyone interested in genealogy. Thank you. Keep up the good work!

I can't imagine how you have managed to keep a set of HTML pages like this going for so long. The prospect of finding a link to update it boggles my mind. Congratulations on your upcoming update, and best wishes as you forge ahead.

Congratulations Cyndi! It was really interesting to read the history of the website. It is such a great tool. I always tell friends who express an interest in their family history to start at your site. Here's to 15 more!

A very happy 15th birthday to Cyndi's List.
Never mind about missing the actual date with the upgrade, Cyndi. This is an occasion for you to relax, safe in the knowledge that you have earned the respect and gratitude of the entire genealogical community. And here's to the teenager as it enters adulthood!
Sláinte.

Congratulations! I've bestowed upon you the One Lovely Blog Award for your great writing! You can retrieve the badge at my blog, Pollyblog, at http://pk-pollyblog.blogspot.com, and you'll also find instructions there on how to bestow it yourself upon your own favorite blogs!

I don't know where to start.

First all, congrats on 15 years. That's a pretty amazing accomplishment for a website.

Secondly...hand coded html!! Wow, I give you props for keeping up with it for this long, while at the same time I am a little stunned you didn't convert before now.

You will love the DB backend once you get used to it. There's no comparison.

It's like comparing the printing press to hand copying books.

Cyndi -- I discovered you in 1996 when you were just starting and when I first began my genealogy quest. I'm still going strong, have a huge file of my family history research, and have no doubt that if it had not been for you, my research and my quest would have fizzled in 1996. Your site gave me impetus to keep going, and I thank you from the bottom of my heart. I have referred many family and friends to your site over the years -- you're the best!

Thanks for all you do for the genealogical world! If it weren't for your website, I probably would have fizzled out really early on in my research. It is really great to have all this information in one location. Hope Cyndi's List continues to be successful for many more years!

I think that it is amazing how a simple helpful idea like Cyndi's List has become one of the mainstays of genealogy. I am always trying to give other people help in researching their family trees and to have a resource such as Cyndi's List is invaluable. Keep it up! 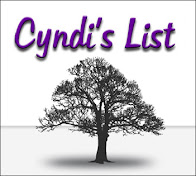